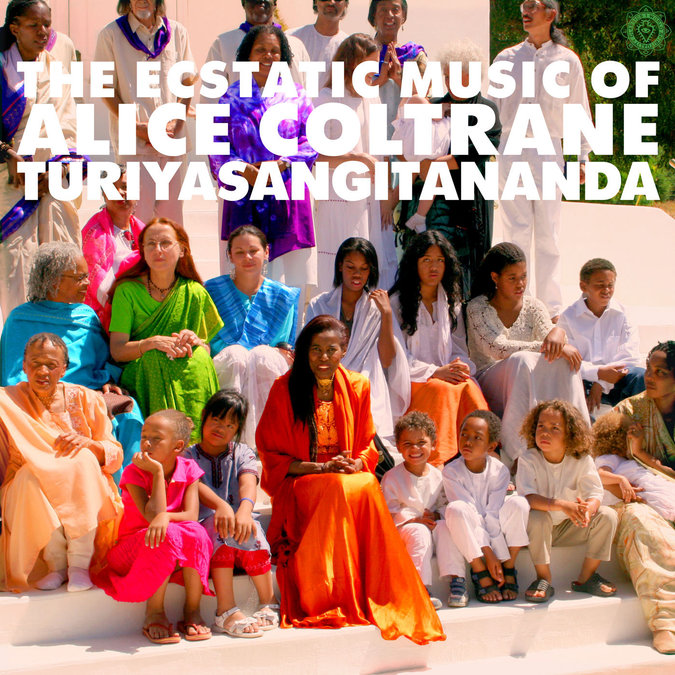 A new album elevates the jazz pioneer's powerful music from the ashram to new audiences.

There is something both revelatory and startling about hearing the devotional music of Alice Coltrane. Having dwelt in obscurity for so long, heard only in musty corners of the internet or passed from hand to hand on cassette, the recordings Coltrane made at her Sai Anantam Ashram in Agoura, California – after she'd turned away from the secular world and her jazz career – are like opening a portal to another time/space dimension. Music nerds and new age collectors knew about them in the 1990s, circulating the worship tapes and CDs privately pressed by the ashram's in house label, Avatar Book Institute. Their plainspoken titles: Turiya Sings (1982), Divine Songs (1987), Infinite Chants (1990), Glorious Chants (1995) and unpretentious word-processed artwork barely hinting at the extraordinary music they contained – traditional Hindu devotional chants, swirled through the vortex of Coltrane's musical incarnations, from the lush harp glissandos and Indian percussion she'd brought to spiritual jazz, to her earlier classical music studies and the Detroit gospel blues she'd grown up singing in church.

As Alice Coltrane's monumental influence as a spiritual jazz pioneer began to be felt after her death in 2007, so did awareness of the cosmic sounds she'd made as Alice Turiyasangitananda Coltrane, or Swamini to her avid students. Her great-nephew, Flying Lotus, who grew up attending her Sunday services on the ashram, began to champion her music and bring it into the realms of hip-hop and electronic music. Once belittled by custodians of jazz history, who'd scorned her as a handmaiden to her late husband John Coltrane's genius, an imitator at best; the story of Alice Coltrane's own genius began to be written, with first a trickle, then a flood of praise for her extraordinary, exultant, almost impossibly beautiful music. Her towering albums from the early 1970s – Journey in Satchidananda, Ptah, the El Daoud and Universal Consciousness – have been recognised as spiritual jazz masterpieces, whose mastery and vision are delivered with a purity of intention which leaves no doubt as to the deep connectedness between Alice Coltrane and her source.

To listen to these ecstatic chants is to open a window onto a private world of a community under the gentle sway of a guru without ego; a humble teacher who literally gave herself and her manifest musical gifts over to a higher power.

And slowly, a cultural awareness has grown of her devotional music – which was never intended for audiences outside the community of her ashram. Made with the sole intention of accessing the divine, of elevating herself and her community into a sublime state, this music is the purest manifestation of the higher consciousness into which she'd ascended. Neither hushed nor monastic, this is music that sounds incredibly alive – a joyous cacophony of blissed out chanting and gospel-like shouts of praise amidst the dizzying swoop of Alice's synthesiser, at once ancient and futuristic, like the sound of exploding stars. To listen to these ecstatic chants is to open a window onto a private world of a community under the gentle sway of a guru without ego; a humble teacher who literally gave herself and her manifest musical gifts over to a higher power. And with the first major reissue of the ashram tapes, via Luaka Bop's World Spirituality Classics 1: The Ecstatic Music of Alice Coltrane Turiyasangitananda, and a new iteration of the Sai Anantam Ashram Singers – soon to perform one of only a handful of concerts worldwide at Melbourne's Supersense Festival -- Alice's radiant cosmos is expanding into mainstream consciousness.

To those of us on the outside listening in, this music may sound otherworldly; but to Surya Botofasina, who grew up on the ashram and is now Music Director of the Sai Anantam Ashram Singers, it sounds like home.

"This music has shaped me," Botofasina affirms, "in the sense that it's what my soul feels as home; and even physically, it's where I feel home."

As a child, Botofasina soaked up the music taught by Swamini, as he calls Alice Coltrane; his mother, Rada, can be heard singing in all the choral sections on the World Spirituality Classics recordings, and provided many of the archival photos documented in the Luaka Bop liner notes. And the mantras which vibrated through his childhood on the ashram have carried him into his adult life as a musician living in New York City.

"This music has helped me tremendously, when I was going through times that I didn't know how to navigate", Botofasina recalls. "As a young man growing up in the city, when I moved here in New York, or just trying to figure out different reasons and seasons, and why I feel certain ways. And this music helped me celebrate, and really be grateful for, the most precious moments in my life, like the birth of my children, or marrying my wife. This music was very much part of every single one of those days. So in that sense, this music has always been the soundtrack of my life."

Reminiscing about the music Coltrane conjured on the ashram, Botofasina notes that she was "very old school. There weren't handbooks or choir sheets; she would sing the note in front of someone, and then they would reproduce it back." In the Vedic chanting traditions, Coltrane would sing a call-and-response with her choir. "Everybody followed her. There was no better leader to follow," Botofasina enthuses. "It was truly like it was from a higher source."

The journey to the heart of the ashram recordings was a more circuitous one for Yale Evelev, the president of Luaka Bop Records who oversaw the World Spirituality Classics project. A jazz aficionado whose musicology runs deep, Evelev had been an Alice Coltrane fan since the 1970s, but had dismissed her devotional music. "I thought about Alice's ashram performances as something that wasn't going to be that interesting, you know?", Evelev remembers with a chuckle. "I didn't go that deeply into it, until I ran into a DJ friend on the street, and I asked him what he'd been listening to, and he said 'Well, to be frank, I just listen to Alice Coltrane tapes every day'. And I said I'd heard a little bit of them, but they didn't really affect me. And he said 'You really should listen to all of them'. And once I listened to everything, I was just blown away.

"I hadn't really realised what an inventive music it was, and how special it was. I wasn't really ready for it when I first heard it," Evelev reflects. "But at this time that the world is in right now, it just feels like this is the perfect time for this sort of music to be more available to people. We all need something super positive, you know? I think right now because of the state of the world, people are responding who might not have been quite so open to it before. It really just has an incredible power."

Botofasina sees the power of Coltrane's music as an expression of her spiritual commitment. "I think the power of the music comes from her absolute devotion to living in a higher state of consciousness," he states. "Just to connect with the divine, and to transmit that to all of us. The true power for me, in growing up with it, was just the sheer connection that one really felt to a divine higher power, and the positivity you could feel in that kind of space."

Chanting in a group, as heard on Coltrane's ashram tapes, can transform an individual's consciousness. "Everybody has different reasons for why they want to invoke something through chanting", Botofasina explains. "There's a term in Hinduism – japa – which means the repetition of the names, reciting a name to invoke some specific good. Like if somebody is repeating the name of Ganesh, the Hindu god depicted as an elephant, it is to remove an obstacle, usually an ego-based obstacle.

"We might be trying to work on various aspects of our self, or to express our pure devotion, or just our ability to feel like we have enough strength to get through the next day. Just like human life is a personal experience, so is the experience that one has when they truly invest themselves in chanting."

Botofasina sees something of this personal experience in Evelev's confession of how slow he'd been to appreciate Coltrane's devotional music. "I think Yale touched on something very interesting about chanting, in that it's a really personal experience", he reflects. "Something that's profound doesn't hit everybody at the same time with the same impact. You might feel it a week from then, a month from then... years from then. As Yale mentioned in his experience, maybe he wasn't ready for it in the 1980s or 1990s.

"But now here we are, close to 2020", Botofasina marvels, "and this music feels almost brand new, to our emotional landscape... and our political landscape. And I feel an incredible amount of dedication, of loyalty and more than anything, just gratitude, for being able to be so close to this music for so long."