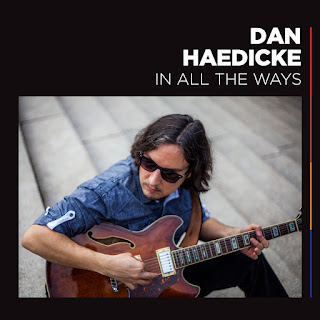 (New York, NY – May 4, 2016) – Kwality Records is set to release In All the Ways by guitarist Dan Haedicke on June 24th. The album is available now for pre-order on iTunes and Google Play and includes the instant gratification track “In All the Ways” featuring Tondrae Kemp. The official album release show will take place on Friday, June 24th at Rockwood Music Hall, Stage 3 at 8:30pm. Tickets are available online and at the box office.

Dan Haedicke is a superior guitarist whose melodic brand of jazz, which is both creative and accessible, is well featured on his debut recording as a leader, In All the Ways. Two years ago, the guitarist formed the DH4, a group that also includes trumpeter Indofunk Satish, bassist Everett Boyd and drummer Doron Lev. For their first CD In All the Ways, the DH4 is joined by keyboardist Robert Knowles, Sean Schulich on flute, and singers Sun Singleton and Tondrae Kemp with a guest spot for altoist Lakecia Benjamin.

Listen: "In All the Ways" (feat. Tondrae Kemp)


Of the new CD, Dan says, “I wanted to write songs for the album that had melodies that listeners would take away with them.” His seven originals on In All the Ways contain many hummable melodies, concise and memorable solos from Dan, Satish, Knowles and Schulich, and an inventive use of the singers on several of the selections. While at times a little reminiscent of the classic CTI recordings of George Benson and Hubert Laws, Dan Haedicke’s brand of melodic grooving Latin and Brazilian jazz is very much his own. The melodies of “Aquamarino,” “Dajo,” “If the Stars” will stay in one’s mind long after the music is over. The groove-oriented “In All the Ways,” the funky strut “October,” the bluish “Nola Shout” and the rockish “Fenix” are among the many highlights of this highly enjoyable CD.

A superior guitarist, Dan Haedicke (pronounced Ha-dik) has developed his own melodic and bluesy jazz voice. In All the Ways, his recording debut as a leader, is filled with warm and memorable melodies, concise solos, and music that is both creative and accessible. Dan founded the Kwality label in 2007 as both a vehicle for his recording projects and as an opportunity for him to work as a producer with such artists as the modern New Orleans soul singer Tondrae Kemp. He has worked extensively as a guitarist (including with Lil’ Fame, Cisco Adler, The Diplomats, Rich Boy, and B. Slade) and as a producer. The live performances of his DH4 and the release of In All the Ways put the focus on Dan Haedicke’s jazz guitar playing and composing, showing that he is a talent well worth knowing about.