Tondrae Kemp, an up-and- coming singer, would like to be a contributing factor in entertainment. He strives to promote freshness, creativity, honesty and originality in his lyrics and music.

Kemp, whose musical style is a mixture of soul, hip-hop, reggae, rock and electronica, expanded his fan-base as an artist once he moved to Brooklyn. He tells Brooklyn Roads that he is more creative musically now that he resides in our borough. Kemp considers himself to be a talented songwriter who understands why it’s so important to experiment with other musical genres. 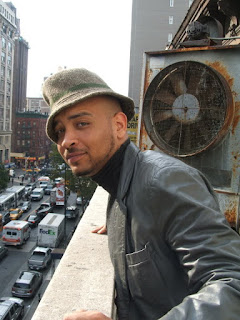 “It’s also taken a lot of the loftiness out of the dream, by way of getting to know and become friends with other professionals, some of whom have had long and successful music careers,” says Kemp. “This is a major positive as I find that goals are more attainable when the steps are more real and you can take the fantasy shades off.”

The New Orleans native’s musical roots began when he started performing in church at the age of 10. He tells us that in addition to gospel music, he was also fascinated with some of the biggest names in hip-hop: — Rakim, Public Enemy, and Main Source — which influenced his ongoing desire to make music. Even though he enjoyed rap music, Kemp knew he was destined to be a singer because he can express his ideas and emotions more freely.

He went on to form a group, All For Love, which allowed him to work on his vocal skills. At the University of New Orleans’ film school he began writing his own songs with friends and musical counterparts guitarist/producer Dani Kartel and bassist/producer Roderick “Bassheavy” Tillman.

Kemp would like to expand his musical resume by collaborating with other elite artists such as Mos Def, Rob Glasper, Flying Lotus, Thundercat, Esperanza Spalding, Kendra Foster or Hiatus Coyote. His dream is to work with one of his biggest idols, Stevie Wonder whose songwriting skills and vocal capabilities he has long admired.

“If Stevie ever had writer’s block, it’d be alright by me if he decided to dip into my catalog. I wish I would’ve written his song, “If It’s Magic.” There is so much gold on that tune and it was from heaven,” says Kemp.

Kemp weighs in on why he believes so many outstanding musical artists from Brooklyn receive so much recognition, noting that the borough is a supportive and competitive environment due to the diversity of its population. He also lauds Brooklyn’s live music venues, citing Freecandy and Littlefield as his favorites.

Performing is crucial for a rising star, he tells us, because artists need their voices to be heard to recognize their strengths and weaknesses, and learn from experience.

“I would just say to perform as much as you possibly can. The more experience on stage, the better your performing will probably become in the long run,” says Kemp. “Brooklyn is a good place to do it mainly because of the aforementioned population of supportive creatives."

To read the full feature, go to Brooklyn Roads Magazine.