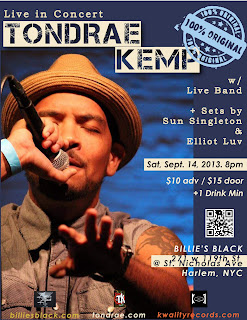 Tondrae Kemp: Transplanted from New Orleans into the metropolis of New York, Tondrae Kemp has been growing exponentially since his departure to the big city. Where he was once known as a soul singer, he is now expounding on that notion by adding the potential for any genre to find its way into the music. From Hip Hop to Reggae, Rock, Electronic and always Soulful, TK could take you anywhere at any moment. Always with a fresh approach and always unhindered. Imagine Zappa influenced by Public Enemy and Stevie Wonder. Something different and sincere. As funny as it is musically fresh. Tondrae would say that he's "Just channeling whatever comes out. A true expression that I haven't attempted to gate or limit by description. An honest flow and expression." Look out for his new album Sun Money and the heavily bluesy video and single "Happiness" both online and in stores now.

"Tondrae Kemp might not quite be the modern equivalent of a Curtis Mayfield or Donny Hathaway, but he just might be the closest that any modern artist has come." - About.com R&B/Soul Guide

Sun Singleton: From singing as a sought-after side vocalist (Q-Tip, Nona Hendryx, N'Dea Davenport, Crown of Thorns, Angelique Kidjo) to performing as a dynamic lead, from music journalism (Vibe Magazine, Ebony Magazine) to online content producer (BET.com, Soulsummer.com), Sun Singleton's immersion into all things musical has lead to a distinctive receptiveness to collaboration and innovation. Her most recent work, a collection of soulful house remixes by London-based label Stilnovo Music, is available now for download at TRAXSOURCE.COM.

Elliot Luv: This R&B singer is making some noise in his hometown New Orleans, La. Elliot Luv has develop an audience through his underground mixed cd's (R&B City Vol. 1, Song In The Trash Can, & R&B City Vol. 2). He then was inspired to do an album entitled Elliot Luv Blaque available online and in stores. Listen for yourself on reverbnation.

Dammian Moore: Dammian Moore is an artist. Born into it and meant to do it. He would be a singing as he flipped burgers if he worked at Burger King. He would write songs to the trees, if no one wanted to listen. Fortunately for Dammian, and us...People are listening and loving his music. Louisiana raised, World student. Uncaged and free at all times. Boundless and Bold. Soulternative....

Billie's Black: Besides being known for their amazing food (and let’s be clear: Billie’s Black serves food that is not just good; it is delicious), Billie’s also has gained respect from the city’s independent music scene. If an artist wants to do a show in Harlem, Billie’s is either first on their list or close to the top. Billie's Black has played host to many an event since owner Adriane Ferguson first opened the doors. After a modest start, they slowly developed a reputation for bringing exciting new and emerging artists - as well as fully established acts - to the Billie's Black stage.