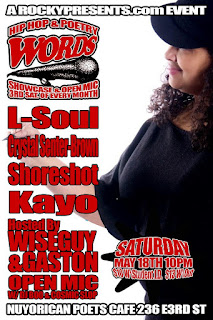 WORDS was created by Rocky LaMontagne & Bobbito the Barber to give young up-and-coming poets & emcees the opportunity to showcase their work to an audience of their peers. This showcase and open mic has featured Company Flow, Canibus, Mos Def, M.C. Search, Willie Perdomo, Reg E. Gaines, Danny Hoch, Saul Williams, muMS the schemer, and Suheir Hammad, among others. The open mic gives artists a space where they can showcase and work on new material. It also gives new artists a chance to perform in front of an audience. WORDS! is hosted by WiseGuy & Gaston and is brought to you the third Saturday of every month. All open mic performances are with the live band and/or DJ.

Crystal Senter-Brown has been featured in Redbook Magazine, Vibe Magazine and Essence Magazine and has been a performance poet and writer for most of her life. Born in Morristown, TN to a bass-playing Baptist preacher (Dad) and a visual artist (Mom), Crystal was introduced to poetry at the age of six. She is the author of three books: Doubledutch, Gabby Saturday and "The Rhythm in Blue,” which is currently being made into a feature film. She is a graduate of Bay Path College and is currently pursuing her Masters in Nonprofit Management and Philanthropy.

Forget everything Mtv has tried to sell you about the Jersey Shore and recognize a true offering from the NJ oceanside in the form of ShoreShot.His music is best described as an authentic blend of hip-hop and r&b soul accompanied by distinct vocals, proper mechanics, and a sharp flow. He's opened for acts such as Maino, Nappy Roots, and Trina. Shoreshot's debut LP "Slowly but Shorely", is armed with an authentic sound and inspired beats, and takes you back to a time when hip-hop was about one thing.....skills. Shoreshot's follow up, "The ProgreSS Report", is a melodic and dynamic journey of HipPopSoulRock rooted in diversity, crowned with originality, and laced with talent. It's currently available for purchase EXCLUSIVELY at SHORESHOTmusic.com. ShoreShot's songs are spreading on credible online mediums such as KRS-One's "Temple of Hip Hop" Radio, and making their way onto primary, secondary, and college radio markets throughout the tri-state. ShoreShot, Erich Wald (singer/keyboard), and Bryan Ketcham (drummer) will be performing throughout the MidAtlanticRegion all spring and summer long. Follow @ShoreShot and @Shoretourgroup on twitter