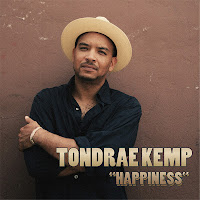 Soulful songster Tondrae Kemp may be new to The DJBooth, but with releases dating back to his 2005 album Still Searching, the Louisiana crooner has certainly put in work. Fast-forward quite a few years later and Kemp is still putting out his soulful tunes for the world to hear with his record Happiness, serving as the musicians latest single. Happiness is the type of heavily bluesy record that would normally seem impossible for someone who didn’t grow up in the golden era of blues to duplicate, but Kemp succeeds at doing just that on his record. The singer’s rich vocals get a bit of visual assistance thanks to the accompanying music video for the record, which features Kemp and his mysterious leading lady. Producers TK and Jens Resch-Thomason keep the blues heavy on the production end as they lace the record with a nice helping of strings and drums. Lookout for Happiness on the crooner’s Sun Money album, which will be out this fall on iTunes. - Written by Danielle H.