Interview: Sarah Rayani and The Band 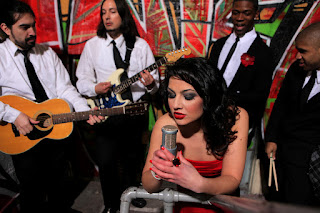 The Brooklyn Independent Music Fest took place at Littlefield in Brooklyn from September 16th to 18th. For three days over 60 bands took to the two stages to perform music which ranged from Alternative Rock to Pop, Blues, Soul and Rap. I checked out the festival on the 16th. Listening to about 10 bands Sarah Rayani And The Band, a Jazz/Soul band, was the one which impressed me most. When I talked to Sarah after her performance I found out that almost all her songs were written by her. She told me how much she was into Jazz and Motown backing vocals. She also occasionally uses Indian tonality with heavy Hip-Hop samples and synthesized pop elements. But what makes her different from all the other singers of this festival is her laid back, sexy and cool voice.


About Sarah Rayani: Born in London, England, to Swedish and Indian parents, she was trained in classical opera vocal and in ballet, Jazz and Hip-Hop as well as. Sarah has worked with producers, musicians and singers from London, New York and Stockholm, including Blastoff Productions, Mattias Caliste of Swedish rap pioneers Fjarde Varlden, and Avery Storm (DerrtyEntertainment / Universal Records) as a vocal producer. In 2010 she was the featured singer on hit rapper Maino’s song “I’m da Future” which is from his latest EP “Unstoppable” (Hustle Hard/Atlantic Records). She has also performed alongside JaySean (Cash Money Records) in Regents Park for the Partnership Walk. Besides being a singer she is also a belly dancer and appeared as a belly dancer in the hit movie Sex And The City 2.

Enjoy the full video interview below!