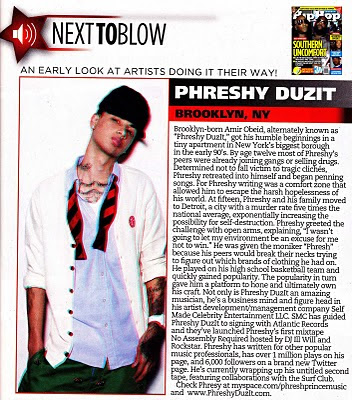 Brooklyn-born Amir Obeid, alternately known as "Phreshv Duzit," got his humble beginnings in a tiny apartment in New York's biggest borough in the early 90's. By age twelve most of Phreshy's peers were already joining gangs or selling drugs. Determined not to fall victim tragic cliches, Phreshy retreated into himself and began penning songs. For Phreshy writing was a comfort zone that allowed him to escape the harsh hopelessness of his world. At fifteen, Phreshv and his family moved to Detroit, a city with a murder rate five times the national average, exponentially increasing the possibility for self-destruction. Phreshv greeted the challenge with open arms, explaining, "I wasn't going to let my environment be an excuse for me not to win." He was given the moniker "Phresh" because his peers would break their necks trying to figure out which brands of clothine he had on. He played on his high school basketball tea and quickly gained popularity. The popularity in turn gave him a platform to hone and ultimately own his craft. Not only is Phreshy Duzit an amazing musician, he's a business mind and figure head in his artistdevelopment/management company Self Made Celebriry Entertainment LLC. SMC has guided Phreshy Duzlf to signing with Atlantic Records and they've launched Phreshv's first mixtape No Assembly Required hosted by DJ lll Will and Rockstar. Phreshy has written for other popular music professionals, has over l million plays on his page, and 6,000 followers on a brand new Twitter page. He's currently wrapping up his untitled second tape, featuring collaborations with the Surf Club. Check Phreshy at myspace.com/phreshprincemusic and www.PhreshyDuzit.com.