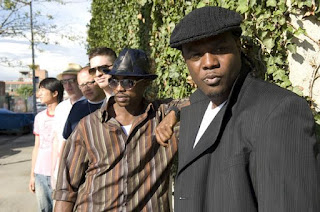 If you’re sick and tired of the plastic, superficial, and pandering sounds of today’s assembly line R & B (that’s short for Rhythm & Bullshit) and are ready for some real, unadulterated soul dynamite, get ready to meet your new favorite band: The Revelations featuring Tre Williams. A soul icon in the making, Williams is already drawing comparisons to the likes of David Ruffin and Bobby Womack, while fellow vocalist Rel and the explosive unit of The Revelations continue to gain momentum and a loyal following out on the road with their dynamic stage show. Having recently released their debut The Bleeding Edge – a truly organic and sample free platter of gritty, southern styled soul gems – Tre took some time to chat with Nu-Soul Magazine about the band’s uncompromising sound, working with Petey Pablo and Nas, and the new album.

Nu-Soul: Your and the Revelations’ sound is so authentic. What’s the secret?
Tre: For one thing, we gel together. The chemistry is good. When you’ve got a team that’s all pulling the same way the only things that can happen are good things. So, when we came up with the idea no one fought it and that to me is the most important thing about the music. All the guys are incredible and we decided that we wouldn’t try to mimic old school – but because the sound was so big back then we decided to do it as a today sound. I think that’s the key to the whole authenticity of it.

Nu-Soul: You’re originally from Daytona Beach, Florida and I understand that you worked with Petey Pablo and Nas before getting involved with The Revelations. I was wondering how you hooked up with Petey and Nas?
Tre: When I got to New York, I was just trying to get a way in and I met a guy who was producing for Petey. He took me to meet him and when I got there, the strangest thing was that they knew who I was. He invited me to record on the title track of Diary Of A Sinner. That was probably the first mainstream project that I had ever been on. The whole Nas situation came about from me and Styles P doing a song called “I-95”that took off in the underground market. Nas heard it and I happened to be going to a meeting with another label and got a call from Nas’s label (Ill-Will)-saying that they wanted to sign me. I was over there for maybe three years or so, in which I was featured on the Hip-Hop Is Dead album and the song “Let There Be Light” which was a huge success. Basically, I learned a lot from Nas. I learned a lot of do’s and don’ts and how serious to take the game–to not just believe your own hype and to stay humble and hungry.

Nu-Soul: The Bleeding Edge is a rapper and sample free album. I was wondering what the transition was like going from hip-hop to organic soul?
Tre: You know what? I don’t think I ever transitioned. I think that when people put me on their hip-hop songs they want me. No one’s ever come to me and said ;‘I want you on my album but I want you to sound like this. We want the Tre Williams sound.’ I’ve always been me and I think that’s been appreciated and it’s allowed me to do the things that I love to do. I’m still doing the same style.

Nu-Soul: How did the project with the Revelations come about?
Tre: After I left the Ill-Will situation, I knew that now was my time. I just didn’t know what doors were going to open for me and where I was going to go. I met up with Bob Perry from Koch (Records) and he asked me to cut a few songs and go from there. I decided to start over. I had an idea for a song which became “I Don’t Want To Know”. I asked him to get me a live band because I had wanted to try something. I didn’t seriously think that he was going to get a live band in the age of Pro-Tools. I came to the studio the next day and lo and behold the guys were there. I really didn’t know that we were going to be a band at that point. As we laid the song down someone got the bright idea to pick a lane that was wide open-because if you really look at it who’s doing what we’re really doing. We bonded with that idea and went for it. I decided to put my solo project to the side and it was one of the smartest things that I’ve ever done.

Nu-Soul: Speaking of songs like “I Don’t Want To Know”, how much personal experience went into the lyrical content?
Tre: A lot of personal experience. Not all of my own personal experience. I’m the type of person that can be on a train and hear someone telling their life story and I can translate that into song. So many people listen to our stuff and think that it must be personal and it’s not so much us as someone that we’ve heard about.

What we wanted to do with this album is really take music back to what it used to be. When we told great stories, you wanted to hear those stories and you held onto those stories. It hasn’t reached the plateau yet where we’re selling thousands of thousands of albums but the people that get it do get it.

Nu-Soul: How has the album been received so far?
Tre: It’s a slow grind especially if you don’t have a major label behind you. You know what I like about it? It’s because the people that are with us are with us because there’s no gimmicks behind this. You either love it or you don’t. The people that come to every show in New York City or Little Rock or Mississippi, they’re coming because they get it-not because it’s been drummed into their heads that they’re supposed to like this or it’s the happening thing. Like say, Sharon Jones & The Dap-Kings, slowly but surely you grind-but you gain faithful followers and that’s what we’re getting right now.

Nu-Soul: You’ve been compared to David Ruffin, Teddy Pendergrass, and Johnnie Taylor amongst others. How much of an influence were they on you and who else has inspired you?
Tre: Otis Redding definitely was a big influence. I went back and I tried to see what made these guys special and what made them special is that they gave it all and sung from their heart. When you look at the Eddie and Gerald Leverts, the Stevie Wonders, the Luther Vandross’s, they gave it. They didn’t hold back and every performance was like their last. I love the comparisons to these guys because without them there wouldn’t be me -and there’s nothing new under the sun. Everybody sounds like somebody. What’s really new?

One lady flew into see our show from Denmark. I thought that was incredible and she said I was like Bobby Womack over there. You can’t help but receive that because it’s an honor to be like Bobby Womack.

Music is coming around in a full circle. Eventually, it’s going to go back to real performers doing real things. I think a lot of people want to come see us because there’s a lack of that. We are as real a group as you can possibly find right now.

Nu-Soul: I know that The Bleeding Edge started out as an EP but you added more tracks. What was it like recording it?
Tre: What we didn’t want to do is slow the process down, because when you write songs without the music the track can be tedious. When you hear a song in your head you hear a certain sound and until you get that sound you keep going back to the drawing board. What I decided to do is allow the band to come up with the music and then write to it. It was a beautiful album to make.

Nu-Soul: There’s a cover of Lattimore’s “Let’s Straighten It Out” on the album. What was the idea behind recording it?
Tre: One day a fan wrote to me and said that they’d love to hear me do “Let’s Straighten It Out”. I started performing it in the show and people were so into it that I decided to record it. I was then able to speak to Lattimore and perform with Lattimore and got his blessings. He loved it.

Nu-Soul: Are you touring right now?
Tre: We’re out right now. We do a very high energy show and it gets better each time. Being a great band and a great live show takes time. We’re mainly in the mid-west in New York City once a month at The Winery Club. We definitely try to stay rooted in New York. We’re out on the road and if anyone wants to see us, get in contact with us and we’ll be right there.