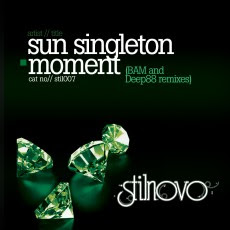 When Sir Issac Newton said that his breakthroughs had been achieved by standing on the shoulders of giants, he was humbly acknowledging the groundwork of other greater talents. It’ll be nice to think that Sun Singleton is doing the same here rather than just sounding sultry smooth and cool on the microphone.

She’s also acted as musical director for the Liza Jessie Peterson Broadway show – and with her solo material on Stilnovo Music she is very much on a path to her own. Her first release on the London label ‘Ready’ received the remix treatment from Swedish talent Opolopo, and Canadian duo Version3.

It wasn’t however after the incredible response of ‘Moment’ (Atjazz Remixes) under Stilnovo music that she’s cemented her place in the higher echelons of house music.

This time around Stilnovo unveils the dance mixes. In doing so they have commissioned an absolute music legend Brian Alexander Morgan, aka BAM. He’s the man who penned and produced hits for artists such as SWV, Mariah Carey and Usher.

Recently Brian has been releasing Soulful House productions under his label Thick Records and he definitely caught our ears! He’s completely flipped ‘Moment’, adding a newly sung chorus to renders it a soulfully drenched r&b styled jewel. The song buzzes with a shimmering soulful aura as he tickles the keys with a delicate finnese as ever.

The other mixes are provided by Italian producer Deep88, mostly known for his popular ‘Time Is Coming’. He gets deep on his luscious rendering with supreme melodies and nicely arranged basslines over a laidback backdrop. He takes you to a strolling pace with his deep saturated chords-and-pads wrapped up in a lightly carefree spirit.

‘Moment’ (BAM & Deep88 Remixes) is a brilliantly complete sonic amalgamation. It ticks all the right boxes in all the right places. Its most definitely another Stilnovo stand-out.