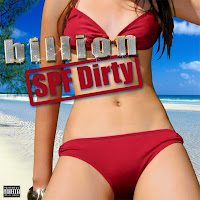 Kwality Records artist Billion brings the heat on his new album, SPF Dirty. The Miami MC now resides in New York, and his voice will remind some of another southern MC, Paul Wall. Much like Wall, Billion can more than hold his own and he showcases is lyrical prowess from beginning to end on this project. The album starts off with Crusher, featuring Mena.

The production hits you right away with the slow, rumbling bass and Billion flows effortlessly on the cut. The lead single, Fluid once again has a very nice beat, which is a very strong point of the album, and Billion kills the hook on this. Solid street banger and one you can hear in the clubs. Denominations also is in the same vein as Fluid, as both Billion and Mena do the damn thing on the track.

Just Right is another great cut as well from Billion, who does not venture out of his lane too much on this album. This album is feel good, nice rhymes over thumping production. Definitely something that you can cruise to. Appearances also from Mo' Fresh on the album. Billion does a great job of showing his witty and sharp punchlines and flow. Be sure to pick up this project on November 24th when it drops and remember the name Billion as he is here to stay.