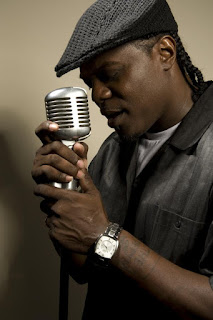 One of the more heartfelt songs on Hip-Hop Is Dead was the Kanye West-produced “Let There Be Light.” Backing Nas' charged verses was a powerful chorus belted out by Ill Will Records' newest signee at the time, Tre Williams. Although much like Quan before him,Williams' musical relationship with Nas came and went. "Light" really was the beginning and the end of it, pretty much.

Williams wasn't quite a brand new artist at the time. Before working with Nas, Williams sung on the title track of Petey Pablo's first album and lent his soulful voice to hooks on various mixtapes.

Although it may appear like it, Williams never intended to position himself as the next T-Painor Nate Dogg. With stylings more similar to Anthony Hamilton, Williams went on to hone his sound with musician and label owner Bob Perry, and eventually, collaborated with formerRoc-A-Fella R&B artist Rell. The two vocalists are members of a band, The Revelations, whose debut full-length, The Bleeding Edge (Decision Records/Traffic Entertainment), is now available in stores.

Williams took some time to shed light on his Ill Will days, Bleeding Edge and even disclosed a desire to write songs for a one-time member of New Edition.

On Getting Signed To Ill Will Records: “It was through Brinks [then-Ill Will Records A&RMike Brinkley]. Brinks ran across somebody who had a CD of mine and he was in the process of looking for artists for the label and he decided I fit the format. We sat down, I talked to Nas and it all sounded good at that point. It didn't materialize the way I would've liked, but it was still a good experience for me. I think I was with him for about three years."

About How “Let There Be Light” Came About: “Brinks came to see me and he had these songs that he said Nas wanted me to pick out as the song to submit for the album. I went through all the songs, about 10 of them, and when I got to that one track, I was like, 'Wow.' I was like, 'This track is bananas.' Brinks said, 'You want that one?' I was like 'yeah.' Then he said to me, 'Nas is not too sure about that track right there.' I said alright, that's all cool, let me do it and submit it to him and if he don't dig it, I'll do something else. Meanwhile, I'm waiting for them to set up studio time, but I'm there in the car with Brinks and I start writing right there. I asked when were we going to studio and record it and told him I needed to go in there that night. I was like, I'm ready, I called my man up and said, hey can I come in lay this track forNas album. He said, sure no problem. I couldn't wait, I went in that same night and knocked it out in an hour. ["Let There Be Light"] ended up being one of Nas and L.A. Reid's favorite tracks on the whole album. I felt like if it had been a single, it would've given the album a [strong] push. I think with all the components, the good lyrics, Kanye West on the track, I felt it was a perfect radio joint.”

On The New Band, The Revelations: “The past sets you up for your future. What I was able to do is while I was working on my solo project with Bob Perry, the whole plan was to go toKoch, that was the first notion. So, what happened then was, I had the idea to do a track with a live band, so Bob brought in these musicians to work with me, and as I'm doing this song, and it's coming out crazy, so vivid, I figured like, let's do this. Meanwhile, Rell came in to write with me, so we started doing that. He laid the track for me, and I was like, I want to keep the backgrounds. Then I said, you know what, we might as well rock with this. We've been together about a year.”

On The Difference Between Soul And R&B Music: “I hate that box. But unfortunately it's a criteria of music today. Back when Otis Redding was an artist, he wasn't considered a soul artist or a blues artist or an R&B artist. He was just the artist. He was just one of the biggest that ever did it. For my meaning, what I think as far as the meaning of 'soul', it's the feeling of the music, the feeling of chivalry and the message. Soul to me is a little raw from R&B. You tend to cut a lot of the effects off and let the artist be.”

On Storytelling Writing Style: “I believe in telling those stories. The reason is, I felt like, I wanted to almost write this album like a book. Not just one plot, but different stories in a book. When you read one story, you finish, turn the page and start a new story. I think that's going to capture the people's imagination even more, like what's going to happen in the end? Rather than just something general. There's a lot of good stories on there, man. That's the thing about some of the best Hip Hop songs, they're some of the best stories. Slick Rick, he told some of the best stories. You had to sit down and listen to those. That's what I wanted to do.”

On Being Possibly Pigeonholed As A “hook man”: “When you look at as far as the hooks, if you look at my whole thing, I haven't done a lot of mainstream hooks. I did a lot of mixtape hooks, but I guess when I will do something other than that [and it proves to be] solid, I'll be in that box. I think with this album right here, people are starting to realize that it's not just about the hooks. A lot of times, the hooks, that's a situation you put yourself in and you need that avenue. I needed that avenue. Right now, I'm in a situation where few are, where the hip-hop community know me, the R&B community know me, the radio know me. Very few artists get a chance to do all those different markets and get accepted.”

On Whom He Would Like To Work With In The Future: “You can't be a great artist unless with some of the greats too. It's a lot of things that I want to do. Like, I want to do an album with me and The Roots [click to read]. I want to do an album with one of my favorite artists,Styles P [click to read]. There's a lot things I want to do. I definitely see a lot of artists that I want to write for, like, this might sound crazy, but one dude I want to reach out to and write for, is Bobby Brown. I think that he has a lot to get off. With some good material he can come right back.”