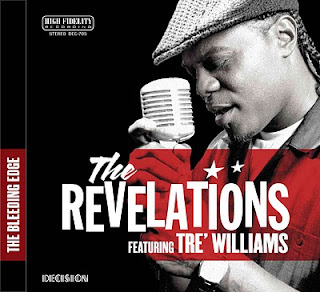 September 22, 2009 - New York, NY - The Bleeding Edge, the debut full length album from Brooklyn, NY-based sextet The Revelations featuring Tre' Williams will be released on CD and online October 6th by Decision Records/Traffic Entertainment. The Bleeding Edge includes the single “How Do I Tell Him” a track that has become a recent radio favorite, currently charting in the Top 40 at Urban AC, with airplay in Washington D.C., New Orleans, Baton Rouge, Charleston, Columbia, Augusta, Columbus, Little Rock, Oklahoma City, Montgomery, Norfolk and other markets. The music video for "How Do I Tell Him" was recently shot in New York by director Dan The Man and is now on-line.

"How Do I Tell Him" video link: http://www.tinyurl.com/revsvideo

Fronted by the intensely soulful Williams, The Revelations line-up includes hip-hop veteran and former Roc-a-fella artist Rell who is Williams’ co-lyricist and vocalist. Wes Mingus who has backed Bilal and Leela James is the band’s guitarist and keyboard player Borahm Lee has worked with Wyclef Jean and Lauryn Hill. The Revelations rhythm section is, likewise populated by experienced musicians: bassist Josh Werner has performed with Matisyahu as well as Sly and Robbie while drummer Gintas Janusonis’ resume includes stints with Erykah Badu and Branford Marsalis.

While the Revelations have been compared to soul greats of the past, the group’s attitude is decidedly contemporary and far from retro. Tre' Williams, a product of the projects of Daytona Beach, made his way to New York where his church-honed artistry and searing sound earned him acclaim from the notoriously critical Amateur Night audience at Harlem’s Apollo Theater. Accepted by the rap community, Williams has been associated with Petey Pablo, Styles P (of The L.O.X) and Nas, whose Ill Will Records released “Let There Be Light,” a single from Nas’ Hip-Hop Is Dead album that featured Williams. Rell, originally from South Carolina, is likewise a multi-dimensional talent who has worked with such notable artists as Jay-Z, Mary J. Blige, Raphael Sadiq, Kanye West, and Dr. Dre. His “Love For Free” became something of a club anthem and he wrote “Here I Stand” the Grammy®-nominated title track to Usher’s 2008 album.

More tour dates to be added soon. Tre Williams and Rell are available for features, photo-shoots and news stories.

For more info go to: www.myspace.com/trewilliamsrevelations